Quality products from Bad Bentheim to the whole world

Bad Bentheim. The SPD member of the Bundestag, Dr. Daniela De Ridder, visited the company Bentec  together with Erhard Kreth from the local SPD association of Bad Bentheim. The company is a manufacturer of state-of-the-art drilling rigs for natural gas, oil and geothermal energy. In a joint discussion with the Chief Operating Officer Thorsten Dirks, the Head of Sales department Thomas Kipker and Sarah Peters, Marketing Manager, De Ridder and her party friend informed themselves about the company, its product range and current foreign trade relations. De Ridder emphasized that politics and business must develop and expand a forward-looking strategy for trade with Russia, Oman and the Gulf region and China.

"The corona pandemic has severely affected public and economic life worldwide and the global economy has cooled down significantly. As a result, domestic political problems are clearly emerging, such as in the USA, China, Russia and the Gulf region. Tensions are also making themselves felt in the European Union. In Europe, the worsening political conflict situation is hitting some countries particularly hard. Common to all regions is the fact that they are important sales markets for German goods. But how can new political and economic effects be achieved in such a way that further economic slumps do not occur? What effects does the current crisis have on local export-oriented companies? During my visit to the Bentec company in Bad Bentheim, I received helpful and interesting answers to these and other questions," explains Dr. Daniela De Ridder, SPD member of the Bundestag for the constituency of Mittelems.

Bentec GmbH Drilling & Oilfield Systems was founded in 1994 as an independent subsidiary within the KCA Deutag Group and emerged from Carl Deilmann Bergbau und Tiefbau, founded in 1888. With its approximately 430 employees, the Bentheim-based company is one of the largest employers and training companies in the County of Bentheim. But the company is also - as in many places in Emsland and Grafschaft Bentheim - faced with the challenge of attracting qualified junior staff and skilled workers. Thanks to close cooperation with schools and universities as well as visits to job fairs, the company succeeded in taking on trainees, Thorsten Dirks reported in conversation with the SPD politicians.

The products from Bad Bentheim are in great demand worldwide - customers come from all parts of the world. This is why the expansion of digitization is very important for the company: with a well-developed digital infrastructure, around 60 to 70 percent of travel time can be saved, explain Dirks and Kipker. The company is currently focusing strongly on innovative developments. For example, software products are currently being developed to further optimize the drilling process. New innovative wind turbines that can be adapted to the environmental conditions of different regions are also being planned with cooperation partners.

Asked about concrete improvement requests to politicians, Dirks pointed out that on the one hand he would like to see more funding for innovative products, also in order to preserve jobs, and on the other hand the existing bureaucratic hurdles in applying for artificial intelligence projects would have to be removed. De Ridder, who is deputy chair of the Foreign Affairs Committee and is the rapporteur for her parliamentary group on foreign trade policy issues, is happy to take these valuable tips with her to political Berlin. Foreign and trade relations, especially exports to Russia and China, were therefore another topic of discussion. Dirks, Kipker, Kreth and De Ridder agreed that both business and politics had to develop a sustainable strategy for China.

China has been Germany's most important trading partner for years, with a bilateral trade volume of almost 200 billion euros. The Middle Kingdom benefits from the open European and German markets. However, German companies have long complained that they are at a disadvantage when it comes to tenders and commitments in China. Therefore, De Ridder demands that China should further open its markets in order to further develop bilateral cooperation. "Free and fair trade is an important basis for our prosperity in Germany. More than 27 percent of our economic management depends on exports, which means that every fourth job is dependent on exports. This is why we have a strong interest in functioning international trade and stable trade agreements - also and especially in the global corona crisis. At the same time, however, trade agreements should also protect our standards and, above all, be designed in such a way that emerging and developing countries also benefit from them," affirms Dr. Daniela De Ridder, SPD member of the Bundestag for the constituency of Mittelems. 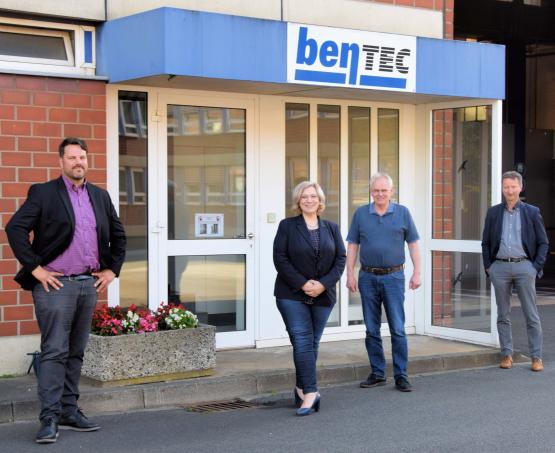